SoDa – A Software Defined Radio for the Ettus Research USRP

SoDaRadio is a multi-mode VHF/UHF/Microwave radio transceiver that runs on Linux. It has been tested on several Ettus USRP models including the N200/WBX, N210/WBX, N210/SBX, N200/UBX, and the B210. 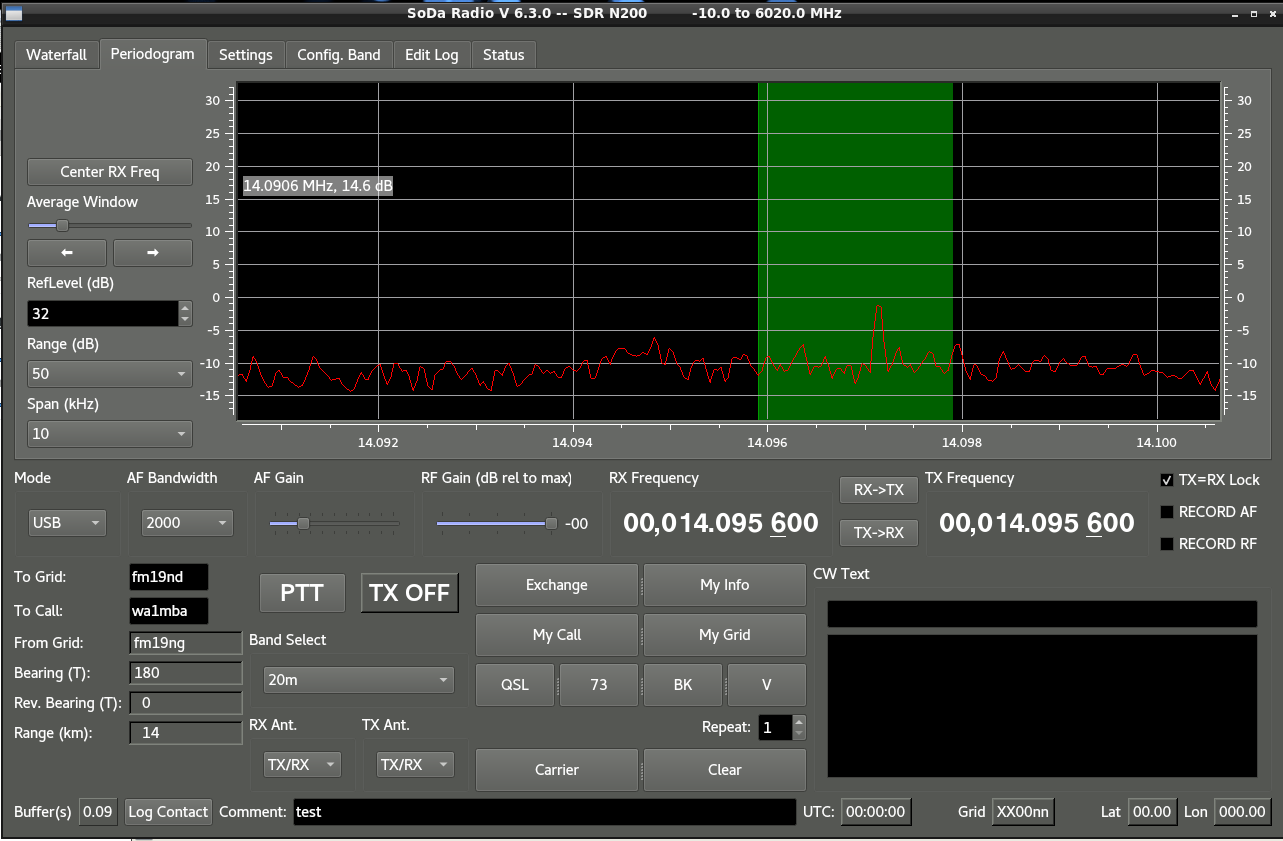 It is non-commercial and released under the BSD 2-Clause license.

SoDaRadio does not yet run on any other hardware platform.

SoDaRadio has been built on both Fedora 28 and Ubuntu 18.04 releases. There is no particular reason that it couldn’t run on any Linux release that is clean enough to compile and run the UHD utilities that come with the Ettus software and that supports Qt5.7 or later.

Interested in more detail? Take a look at the documentation here. “SoDa – A Multimode VHF/UHF Software Defined Radio” was presented at the 40th Eastern VHF/UHF Conference in 2014.

You have two choices here.

You may build SoDaRadio from scratch using git and cmake. This really does work rather smoothly on Fedora and Ubuntu systems. Before each major release, I do a build on at least two recent Fedora releases, and the current and previous Ubuntu LTS releases.

Ready to build-it-yourself? Jump down to “Building from scratch.”

Alternatively, if you are running Ubuntu 18.04, or Fedora 28 you can download binary kits that just “do the right thing.” They’ll install all the prerequisites, put the necessary files in the right place and are generally a pain-reduced way of getting SoDaRadio running. The only real downside to the binary installation is if you really really must run something other than the libuhd version that is supplied by your distribution (if you use Fedora) or by Ettus (if you use Unbuntu). This can be a showstopper for folks who’s GnuRadio installation is finicky about which version of libuhd it needs. If you think you may be one of those people, build SoDaRadio from scratch. See the instructions below, at “Building from scratch.”

Installing from a kit

Kit installs are pretty simple. Download the appropriate package, and install with the normal installer for your OS. If you’ve managed to install the Ettus software, then SoDaRadio should not present any particular problems.

The following works for installing on Fedora 28. Older kits for Fedora 27, 26, 25, and 24 are no longer supported. Version 5.3 fixes significant problems with T/R switching in older versions.

SoDaRadio is no longer supported on Ubuntu 16.04, 17.10 or prior releases. None of the older releases have adequate support for Qt. SoDaRadio versions prior to 6.0 may build on Ubuntu systems.

Sources can be cloned or downloaded from the github site. If you haven’t used git, don’t get wrapped around the axle. You won’t need mad wizard ski112 to get through this.

The next steps depend on which distribution you are using.

This process has been tested on a straight-out-of-the-box Fedora 28 release. It installs all the prerequisites. (If you really need to use the libuhd version that you’ve installed yourself for some other reason, skip the last installation step.)

Run the installation commands as “root” or use sudo.

Now it is time to get a copy of the sources and build the kit. That process is pretty much identical for all of the distributions, so continue on to “Compiling and installing on any platform”

SoDaRadio no longer builds on Ubuntu 16.04 – its Qt5 version is far out of date (This is somewhat frustrating, because the last update to 16.04 was more than a year and a half after the required version of Qt5 came out.)

Run the installation commands as “root” or use sudo.

Compiling and installing on any platform

This will run for a while. You should see absolutely no errors or warnings as I put real effort into making sure the system builds cleanly. If you get a warning or error, copy the text of the warning/error into an email and send it to radiogeek381 at gmail.com with the output of the following command:

The command must be typed somewhere in the tree that you just created with the git clone command.

To start the SoDaRadio, connect your Ettus USRP to the host computer. Connect an antenna to the TX/RX port.

For users of the B2xx series, it is best to initialize the radio with uhd_usrp_probe. Firmware loading can take some time, and SoDaRadio can’t tell whether the radio is slowly initializing, or the control link is broken.

If this is the first time you’ve activated your USRP, or if the library has been updated, it is likely that you’ll want to run uhd_usrp_probe to find out if the firware files are up-to-date. If not, the UHD utils will tell you so, and direct you to run an update script (as root).

When all is connected, and uhd_usrp_probe makes happy noises, you are ready to run:

If you haven’t installed SoDaRadio, but have built it from scratch, you can start SoDaRadio from the build directory like this:

It should come up tuned to something like 10,368.100 or nearby. That’s not a very good default. Sorry about that. To tune to a more reasonable frequency, slide your mouse over the RX frequency numbers. The “underbar” that sits beneath one of the digits indicates that this is the digit that your mouse can change. Click MB1 above the middle of the numbers to go up, below to go down. To move to a new digit, click MB3 on the right half of the number display to go down, left half to go up. Yes this is crap UI design. I’ll fix it soon.

I often click the “TX/RX Lock” button, since I don’t spend a whole lot of time working split.

Poke buttons. Try things. Don’t hit the “TX” button unless you have something connected and the necessary license to operate in that band.

Summary: MB3 is very useful for scanning. For digging out whispers, use MB1.

The move to an asynchronous audio chain through QAudioOutput has eliminated the instability seen with Version 5.3.